Contact us:
verkhnedvinsk.vitebsk-region.gov.by osvejski@rambler.ru
Address:
Vitebsk region, Verhnedvinsk District, г.Верхнедвинск, ул.Советская 170, к.2
Osveisky reserve is one of the most attractive and mysterious places in Belarus. It is located close to the border of Latvia and Russia. Many people consider it a temple where you can recharge and replenish your vital energy. It seems that the nature has never been touched there: ancient trees, ponds, herds of deer, elk, and even bison — everything lives its own life, not being distracted by curious tourists and photo hunters. There are no burning deadlines, everyday problems, and social networks — just you and the untouched world.

The Founder of the Reserve and His History

Igor Romanyuk is the owner of this territory (its area is slightly more than 30 thousand hectares). He used to work as an engineer, but once he realized that it's much better and much more useful to protect forests. So he decided to go in for tourism and forest restoration. Then he was invited to work in Osveisky reserve. Igor Grigoriyevich fell in love with the beauty of its lakes and decided to stay there. More than six years have passed since then.

Today five people work in the reserve. All of them actively promote the reserve to increase the number of tourists visiting it.

Du Island: Why Did Its Inhabitants Disappear?

Du Island is the heart of Lake Osveyskoye. And it has not always been uninhabited. Until the 1970s, it was full of life.

The island was divided into four parts: Birulino, Vaskovo, Tsikenevo, Loskovo. They were named after their owners, and before that, tribes roamed there. In order to navigate in this large territory — the area of which, by the way, is five square kilometers — people gave each place a certain name, which was associated with it. For example, bumblebees constantly flew over the Shmelevka field, and you can find honey even under the earth surface.

Before the war, there were 72 houses in the village. But all of them were almost destroyed by the Germans. That is why people had to build the houses from scratch.

The infrastructure was pretty simple: there was just one store, an elementary school where children from the first to the fourth grade studied together, and a collective farm.

Surprisingly, the village people rarely needed a doctor; they were very independent and friendly.

The people began to leave the island voluntarily: mainly because of the children who wanted to continue their education in the city — nobody could transport children by boat every day.

Over the years, there was nothing left on the island but trees and an abandoned power station.

Of course, the island began its new life pretty soon: today a natural trail is being built there and new ways of tourism development are being invented.

What Can You do in the Reserve?

There are different types of routes: water (Osveisky and Lisniansky cruises), walking, and car routes. 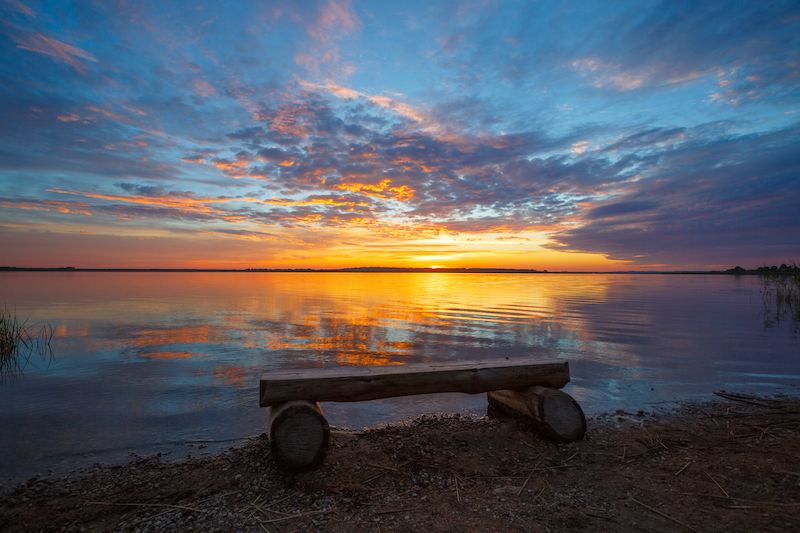 In the immediate future, saunas, hotels, and a tourist site will be built on the territory.

Moreover, hunting tourism is popular there because, according to the Belarusian legislation, it is allowed to hunt in reserves.

And on the top of that, you can enjoy incredibly beautiful views that definitely deserve to be photographed and remembered for the rest of your life!

If you have been looking for a cozy and modest place, where you can stay alone with your thoughts, or, vice versa, leave and forget all your troubles for an indefinite period, Osveisky reserve is what you need.